The Nerf Elite Roughcut 2×4 is a new blaster addition to Battle Archery’s Nerf Zone arsenal! The roughcut 2×4 was released in 2013 and it was part of the Multishot Madness release and it has one tactical rail on the top-side of the gun – This allows you to add a scope or any other tactiCOOL advantage. Let’s dive a little bit deeper into our new addition and see why the Nerf Elite Roughcut 2×4 is a great choice in your next Nerf Wars nerf party at Battle Archery. 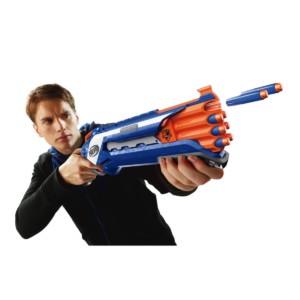 The roughtcut is one of our favorite new guns. Not just because it looks so darn awesome (believe me it looks like a sawed off shotgun), but it feels great and shoots great too! The Roughcut 2×4 fits into your hand very well, it has a great top end weight to it and that’s why it feels so great aiming and lowering the gun. Side Note: Holding two roughcuts, one in each hand is definitely super badass and feels awesome! If you’ve ever played overwatch, with both roughcuts you’ll definitely feel like the Reaper unleashing his ultimate.

The color scheme of the elite Roughcut 2×4 depends on which category you have purchased. There is a N-strike Elite, and Elite XD and two different Zombie strike Roughcuts. So if you’re a collector you’ll be looking for all four of these bad boys.

Almost everyone knows what the N-strike Elite group of guns colors are. We’ve got: blue, black, white, gray and orage, the classics. For the Elite XD series the roughcut was released in black, orange, and white. For the Zombie strike guns, you’re looking at the following color scheme: green, brown, black, gray, and orange.

[Did you know? The Nerf Roughcut 2×4 was first announced with the N-strike Elite Series, and they called it the Ruff Cut? They decided to re-release it with some new priority air sensor technology and call it the Roughcut instead!]

Why is the Nerf Elite Roughcut 2×4 one of Battle Archery’s favorite Nerf Zone guns? Well, let’s talk about its accuracy, power and versatility in a well rounded Nerf Wars team.

The roughcut uses air restrictors and air sensor technology to know exactly where your darts are equipped in the slots. Because it is pump action and does not have a barrel to steady the dart when fired, sometimes the nerf roughcut may not shoot as straight as we all want.

This gun packs quite the punch! Nerf definitely gave this blaster it’s 70 feet range. Just make sure you’re using a good bunch of darts. If the darts are worn out or ripped, you won’t be getting the range you need!

Why are we giving it a 9/10 rating? Well a couple reasons. First off, the blaster is pretty light and has an interesting top heavy design. This allows for quick mobility and good control when rounding corners, definitely important in split second decision making and for covering large amount of terrain to capture the flag or get away from zombies! Secondly, we have the air sensor technology. You can load the darts into whichever slot you want, and the gun will always fire from the first row that has darts in it. Which means that you can put two darts into the last 2 slots and the roughcut will know to fire those instead of the top ones. You also have the option of pressing the trigger lightly to only shoot one dart, or press the trigger fully to release two darts at the same time! This is perfect, because it gives you the options to make your strategic decision. Go for the one dart snipe to conserve ammo, or decide to cover more area with a two dart spread! Thirdly, we’ve got slam fire! Desperate times call for desperate measures. If you’re outflanked or surrounded, this blaster gives you the option to unleash all your darts in 4 quick pumps as you hold the trigger and slam the pump! Take that zombies! 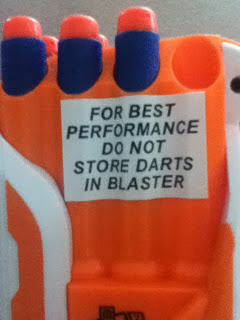 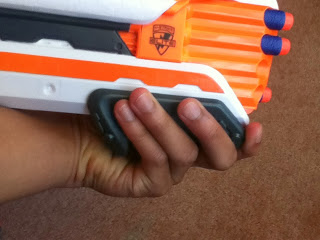 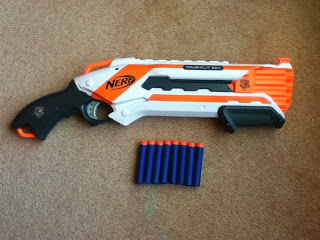 [Did you know? The roughtcut was the first gun out of the N-strike elite series to be able to fire more than one dart? Yup, the rough cut is the pioneer of shooting multiple darts at once for the elite series!

Well that about sums up our new gun addition, the N-strike elite Roughcut 2×4 – We hope you get a chance to try it out next time you plan a game at Battle Archery’s Nerf Zone. If you do plan to book your next nerf birthday party or event, make sure you give us a call. The Battle Archery medieval arena is the only arena that uses multiple platforms to take your games to the next level!