In this article, I am going to present the review of the Nerf Elite 2.0 Phoenix. This is a flywheel operated, magazine-fed, semi-auto blaster master which is very similar to the Stryfe.

The Nerf Elite 2.0 Phoenix includes the blaster scope magazine darts and the instructions. Here is the external overview of the commander:

It appears to be an Elite 2.0 trend: the little circle on it. It protrudes out and it leaves a sharp spot that catches the webbing of my hand. It’s not like a huge deal but it’s enough to annoy me. They could have just smoothened it out, like all of the old Elite blasters. The Elite blasters, generally, have great grips. However, all of the Elite 2.0 grips have this uncomfortable little dot. I am pretty sure that this grip will be fine for most of you.

Operating the nerf phoenix goes largely as one can expects it to. While operating, I did not experience any jams and malfunctions. It feels very similar to a Stryfe. To compare this blaster master to others, it achieves an average velocity of 71 feet per second with Nerf Elite darts, which is almost smack on the 70 fps par. Therefore, this shoots just like most Nerf blasters and almost exactly like the Nerf Stryfe. In short, it has normal firing velocity, no jams and malfunctions and everything is  similar to a Stryfe. This is the objective information I can provide on the Nerf Elite 2.0 Phoenix.

To my personal opinion, with adequate firing velocity and no jams and malfunctions, there is not any objective reason to avoid purchasing the Nerf Elite 2.0 Phoenix for kids’ birthday parties. I don’t think it is the successor to the Stryfe. Stryfe is a superior blaster master to the Phoenix. I did the more tactical flare. You have two side rails, just for the tactics.

Even if you do not add anything to the rails, I think it looks cooler than the Stryfe. When I saw the photographs before I purchased one, I was amped. I was so excited. I really thought this was going to be an upgraded Stryfe, with more tactics, better balance and overall better fit and finish. But when I opened it, shot it, it immediately became apparent that this is not an upgraded Stryfe at all.

The firing performance of these two is much comparable. However, the ergonomics, the balance and using the blaster is drastically different.

The batteries in the Stryfe are right over the pivot point on the blaster master. Therefore, using this blaster in pistol form is just fine. But, the Phoenix has the batteries all the way up in the tip of the blaster, so it’s really front heavy. It drags down if you add a long stock in a barrel, though it changes the center of gravity and the ergonomics. So, if you add a long stock in a barrel, I don’t think the balance and weight of the phoenix are that bad but in pistol form, it is just uncomfortable. It is way too front heavy. The balance is just terrible.

In addition to the weighing issue, this magazine release is awful. You have to use the back of your knuckle to activate it and it requires a lot of force. The echo is the exact opposite. The magazine dropped out when I wasn’t trying to let it drop. Compared to the Stryfe magazine release, which is the standard Elite magazine release, this has  a great design. You can use your middle finger and pop it or use your thumb on your offhand. This one is trapped inside the trigger guard and it’s a quite tight trigger guard. Moreover, if you have got thick fingers and if you are wearing gloves you might genuinely have an issue with getting your finger in there. Therefore, the terrible balance in this really uncomfortable magazine release will affect everybody that purchases one of these blasters. 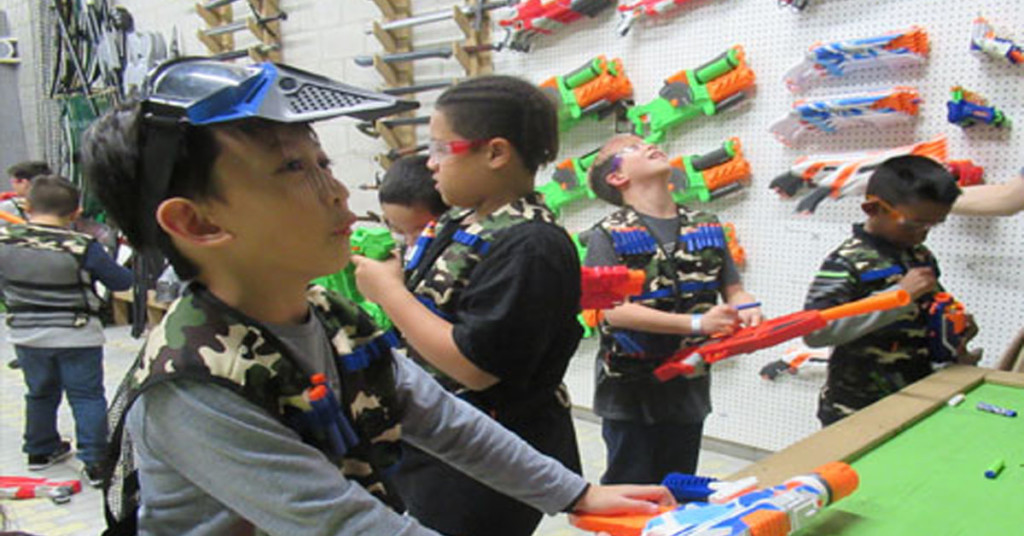 I personally and subjectively do not like this grip design. I find it uncomfortable in the webbing of my hand but that is a subjective complaint. It might fit just fine on your hand.

I really hated the magazine release because when I tried to open it up and fix it, I ran into an issue that everybody is running into with these Elite 2.0 blasters. They glued the freaking gun shut. They went out of their way to secure the blaster. Therefore, you cannot get inside it.

Opening up the blaster may not be relevant to you right now but if something goes wrong with the blaster in a year or two, you can’t open it up. You can’t fix it on your own. You have to throw it away and buy another one and that’s exactly what they want you to do.

Whether to buy or not to buy it for kids’ birthday parties? Buy a Phoenix or a Stryfe? Comparing these two, I think the Stryfe will be better for about 95% of the people because it works better. The balance is better. The magazine release is better. If you are really into the appearance and the tactics of the blaster, the Phoenix is a little bit better. Firstly, the Phoenix is symmetrical from the left right axes but the Stryfe is not, it’s offset. When you put certain attachments on the blaster, it looks a little weird because they don’t really align with the centerline of the blaster. Secondly, if the two tactical rails are not enough and you just love your tactics, the Phoenix offers five tactical rails which is impressive. If you buy Nerf blasters primarily to hold them and to feel tactical or if you are a cosplay guy and it’s all about the imagination, I suggest you buy the Phoenix. But, if you want to buy Nerf blasters in order to shoot darts and to defeat other people, I would recommend the Stryfe for sure. However, if you are into the competition or Nerf wars, I would recommend you check out the Adventure Force Spectrum. It outperforms the Stryfe in almost every way but I hope they don’t discontinue the Stryfe in replacement of this because this is an inferior product. Come test out both the Spectrum and the Phoenix at Battle Archery and you can make a much better and informed decision later!